Elden Ring is a title that delights fans of the genre but struggles to convince on the technical side. This is especially true for Xbox gamers, for whom it is not possible to play with a stable framerate at 60 FPS on Xbox Series X or Xbox Series S. As we saw in Digital Foundry’s analysis, the PS5 allows launching the PS4 Pro version in order to enjoy a more stable game without too many constraints.

Digital Foundry recently attempted to do the same on Xbox consoles by playing the Xbox One X version on Xbox Series X, but the results were inconclusive. 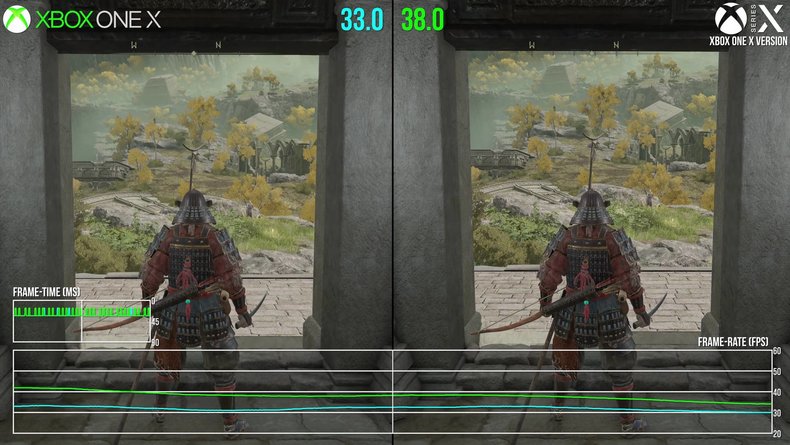 As we can see , the Xbox One X version that runs on Xbox Series X also does not allow you to enjoy a stable 60 FPS. This is quite a surprising finding given the results of the PS4 Pro version on PS5.

Even more surprising, Digital Foundry explains that the title seems to be using the power of the Xbox Series X to improve the graphical fidelity and image resolution rather than framerate.

As it stands, running the Xbox One X version on Microsoft’s next-gen console can experience performance similar to the quality mode of the Xbox Series X version. The framerate remains generally between 35 and 40 FPS, which is not ideal, even with a VRR compatible screen.

How to launch the Xbox One X version on Xbox Series X?

If you still want to try the experience of playing the Xbox One X version of Elden Ring on Xbox Series X, certain conditions must be met. First, this is only possible with the physical version of the game. You must first put the console in “offline” mode in the network settings and disable automatic updates so that the Smart Delivery function does not trigger the installation of the Xbox Series X version.

Once the game is installed on your console, go back online and launch the title. The console then offers you an update of 40, 3 GB, click on the “cancel” button and go back to “off online” to launch the game in Xbox One X version on Xbox Series X.

Of course, several features will be unavailable and you will have to repeat the operation each time you want to play the game. that there is no real advantage, we advise you not to waste your time with this operation.